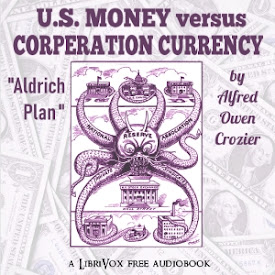 In 1908, the National Monetary Commission was established by Congress to study financial boom-and-bust cycles. Senator Nelson Aldrich (Republican-RI) was chair of the commission. He, in secret enclave with a group of bankers, drafted what was called The Aldrich Plan, which provided for a central "bank" that would hold funds individual banks could borrow in the case of a bank run, print currency, and act as the fiscal agent of the US government. However, the plan gave little power to the government and seemed to give almost absolute control of the country's currency to Wall Street financiers. This 1912 book outlines the dangers and supposed duplicity of The Aldrich Plan while it was being debated in Congress. (The plan was eventually defeated, but was used as a basis for the Federal Reserve Act, which was signed into law in 1913.) - Summary by TriciaG (16 hr 24 min)

Chapter 2 part i - The Aldrich Plan

Chapter 10 - A Central Bank to be Bought?

Chapter 13 - Money is the Power

Chapter 14 - The Slavery of Debt

Appendix - Press Notices of ''The Magnet''

not best title for wall street vs U.S.

excellent writing although a little over the the top with 1911 statistics. But really makes the clear point for 2022 upcoming midterm elections. the federal reserve must be abolished!!!

2nd time listening, if you're interested in this subject i recommend reading The American Eagle Gold Coin Act of 1982: Hearing Before the Subcommittee on Consumer Affairs and Coinage of the Committee on Banking, Finance, and Urban Affairs, House of Representatives, Ninety-seventh Congress, Second Session, on H.R. 6054 ... September 28, 1982 https://books.google.com/books?id=okwj6u8xkboC&source=gbs_navlinks_s