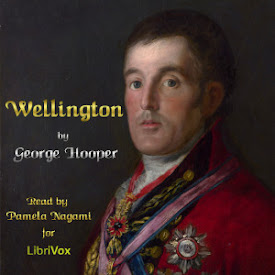 Arthur Wellesley, 1st Duke of Wellington, (1769-1852), was born in Dublin, the younger son of an Irish Protestant aristocrat. He served with his brother in India and rose to prominence during the Napoleonic Wars in the Peninsular Campaign. As a youth, his mother saw little promise in him, but Wellesley was an early riser and a hard worker, inured to the harsh life of the army camp, and conscientious in his knowledge of terrain and of defensive tactics. He famously commanded the allied forces at the final defeat of Napoleon at Waterloo, but the two men never actually met. Although a staunch conservative, as prime minister in 1829, he was persuaded by Robert Peel to approve the long-overdue Catholic Relief Act. The journalist, George Hooper, penned this lively little biography in 1889, when he wrote that there were still many people alive who could "cherish the recollection of the silver-haired veteran, wearing a blue coat and white waistcoat and trousers, riding or walking through the streets, or painfully listening with one hand to his best ear, in the House of Lords." (Pamela Nagami) (7 hr 50 min)

Ch. 5: The First Rescue of Portugal

Ch. 6: The Second Rescue of Portugal

For this treasure about a man that left his mark in India, in Portugal, in Spain, in France, in the Netherlands, in Belgium, besides his own country!

An excellent look at the Duke of Wellington. Although pronunciation is interesting at times.