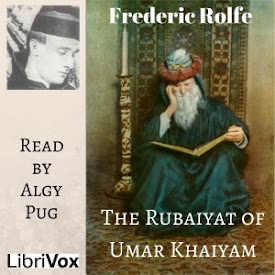 The Rubaiyat of Umar Khaiyam

In 1867 Jean Baptiste Nicolas (1814-1875), scholar and career diplomat, published the first major French translation of the Rubaiyat of Omar Khayyam. This version is in prose and the collection contains 464 verses.

In Nicolas’ view, Omar was no Epicurean reveler but rather a relentless spiritual seeker – his frequent allusions to wine and lovers are metaphors, expressive of a divine discontent that can only be resolved by union with a mystical beloved. However, most other translators and commentators regard Omar as a man who sampled and enjoyed both earthly and philosophical delights.

In 1903 Frederic Rolfe, the self styled “Baron Corvo”, published an English translation of Nicolas’ version. In the same year Robert Arnot published a collection of translations which also included an English version of Nicolas’ text. While both these translations are in prose, Rolfe’s version, with its heraldic and evocative verbiage, and its presentation of Omar as a more rounded personality than Nicolas’ etiolated mystic, can be considered, as with Fitzgerald’s celebrated translation, as an independent work of art. (Summary by Algy Pug) (2 hr 37 min)