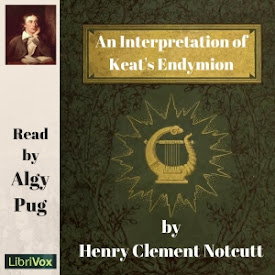 An Interpretation of Keats's Endymion

Endymion is the largest work by John Keats and was composed between April and November 1817. When it was published in April 1818 the critical reception was almost universally hostile. Since that time, many readers have found the poem dense and inaccessible, and have preferred to focus on the occasional gems of poetic commentary for which it has become famous. Feeling that the poem was both undervalued and misunderstood, in 1919 Professor Clement Notcutt published a lengthy essay, which could be considered a “user’s guide” to Endymion. He sums up his intent in the introduction: A careful study of Endymion made some ten years ago led to the conclusion that there was more of allegorical significance in the poem than had hitherto been recognised, but the effort to trace that significance was only partially successful. Further study since that time has gradually opened up the way to the interpretation that is worked out in the following pages. It is probable that there are details in the story the meaning of which still lies hidden, but it may at least be hoped that enough has been discovered to win for the poem its rightful place among the not very numerous examples in English poetry of well-wrought allegory. In 1921 Notcutt published a further essay entitled: The Story of Glaucus in Keat’s Endymion. - Summary by Algy Pug (3 hr 39 min)

The Story of Glaucus in Keats’s Endymion