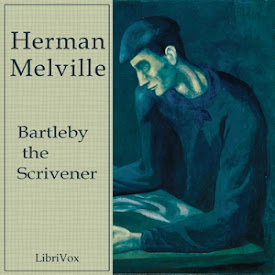 Bartleby the Scrivener, A Story of Wall Street.

"Bartleby the Scrivener: A Story of Wall Street" is a short story by Herman Melville. The story first appeared, anonymously, in Putnam's Magazine in two parts. The first part appeared in November 1853, with the conclusion published in December 1853. It was reprinted in Melville's The Piazza Tales in 1856 with minor textual alterations. The work is said to have been inspired, in part, by Melville's reading of Emerson, and some have pointed to specific parallels to Emerson's essay, "The Transcendentalist." The story has been adapted twice: once in 1970, starring Paul Scofield, and again in 2001, starring Crispin Glover. (1 hr 30 min)

This was very well read. The reader was clear-voiced and had a calm tone that fit the voice of the story's narrator IMO.

Found this through an obscure reference on crash course history.

Perfect introduction to the great mind of Melville. Much appreciated!

By the title is thought this would be dull, it was anything but!

I missed the point of this whole endeavor

Delving into the character of one eccentric man