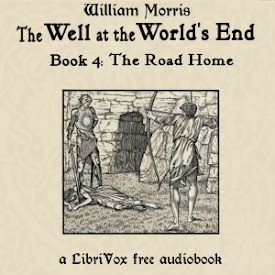 The Well at the World's End: Book 4: The Road Home

In The Well at the World's End, Ralph of Upmeads, youngest son of the King of Upmeads, leaves home (where nothing exciting ever happens) without permission and sets out looking for adventure. When he hears rumors of a well that exudes water with magical properties, he is intrigued and begins his quest. Along the way, he travels through various towns and wildernesses and meets -- and is sometimes led astray by -- a host of interesting people including a mysterious knight, a beautiful woman who may be a goddess, a treacherous servant, a brave tavern wench, a barbarian warrior, a solitary sage, and a sadistic king. Book 4 finishes his adventure. - Summary by Kristingj (5 hr 27 min)

Ralph and Ursula Come Back Again Through the Great Mountains

They Hear New Tidings of Utterbol

They Winter With the Sage; and Thereafter Come Again to Vale Turris

A Feast in the Red Pavilion

Bull Telleth of His Winning of the Lordship of Utterbol

They Ride From Vale Turris. Redhead Tells of Agatha

Of Their Riding the Waste, and of a Battle Thereon

Of Goldburg Again, and the Queen Thereof

They Come to Cheaping Knowe Once More. Of the King Thereof

An Adventure on the Way to the Mountains

They Come Through the Mountains Into the Plain

They Come to Whitwall Again

They Ride Away From Whitwall

A Strange Meeting in the Wilderness

They Come to the Castle of Abundance Once More

They Fall in With That Hermit

A Change of Days in the Burg of the Four Friths

Ralph Sees Hampton and the Scaur

They Come to the Gate of Higham By the Way

Talk Between Those Two Brethren

An Old Acquaintance Comes From the Down Country to See Ralph

They Ride to Bear Castle

The Folkmote of the Shepherds

Dame Katherine Tells of the Pair of Beads, and Whence She Had Them

They Go Down to Battle in Upmeads

Ralph Brings His Father and Mother to Upmeads

Yet a Few Words Concerning Ralph of Upmeads

The story was wonderful but some of the readers need to be replaced. I never realized that women were such better readers then most of the men who were reading. Either they could not read properly and had little storytelling ability, or-- and this is true of one especially-- they overdramarized the reading so that it became almost ludicrous. There was one notable exception, one male reader who was great. The reading for the first three books, done mostly by women, was much better.