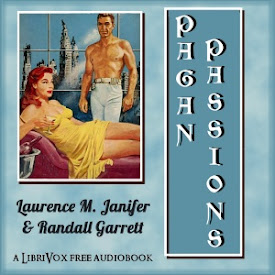 'Adult' Science Fiction? Well, why not? Science Fiction deals imaginatively with odd and unsettling subjects, why not sex? In this novel, the The Gods and Goddesses of Ancient Greece and Rome had returned to Earth—with all their awesome powers intact, and Earth was transformed almost overnight. War on any scale was outlawed, along with boom-and-bust economic cycles, and ...er... prudery—no change was more startling than the face of New York, where, for instance, the Empire State Building became the Tower of Zeus! Our hero, William Forrester is an acolyte of Athena, Goddess of Wisdom and therefore a teacher, but Maya Wilson, girl student, was a worshiper of Venus, Goddess of Love and she definitely has different ideas of what to do after class with your professor, especially in a world where prudery has been outlawed. Much dilly-dallying, spooning and downright shenanigans occur I am sad to say but the plot may thicken in the end. - Summary by Phil chenevert and the author (5 hr 25 min)

Great story, loved It! Quite a twist on the story, really enjoyed seeing it unfold. Very well written and well narrated. Voice was perfect for this book. Highly recommended!

Anytime a male engages in a relationship with female it is missogyny... Naturally males are superior to females. the fact this story show superior Males designing to engage in a romantic relationship with inferior females means the evil males are taking advantage of the helpless females. Modern femism is all about power dynamics. Just as it is reherensible to engage in romantic relationships with mentally disabled, or persons of lower societal position aka underlings, or persons less wealthy than you, it is also reheprehensible for a superior male to engage in a romantic relationship with a female... Story needs to have all protagonostis engage in same sex relationships while loudly proclaiming how evil heterosezuality is evil. If you disagree you are an evil homophobic misogynist who want to keep women in barefoot and pregnant. Women should not make babies. They should instead make money for rich white billionaires by minding their convenience stores. It's all about women's liberation

Very interesting modern twist on the tall tales. Start with the premise: what if the gods have returned and you are summoned to appear before them... then pick a direction and arc it to a conclusion It is an interesting ride, not my usual cup of tea but I’m glad I listened to the end as it turned out to be a good cup in the end. The reader is one of my favorites.

I very much hesitate to say anything else, not wanting to reveal a thing. I will say that Phil does an amazing job in his reading. Certain books, I believe, call for certain readers; I can hear past echoes of Pagan Passions calling out "Phil, read me. Phil, read me."...

Enjoyable story about the Gods

A very enjoyable story. Sound quality is poor but you get used to it.

A great book read by the great Phil chenevert you can’t lose!