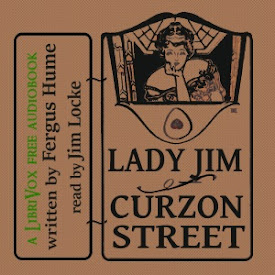 Faced with bankruptcy and trapped in an unhappy marriage, Lady Jim Kaims has to solve her problems alone. After every decent way fails her, and with no friend to assist, she resorts to committing crimes. Fergus Hume delves into the mind of an extremely clever criminal with humor, understanding and even compassion. This book is a roller coaster ride which would keep you guessing from start to finish. - Summary by Stav Nisser. (15 hr 8 min)

This story was certainly a departure from the author's normal mystery. Actually, it could easily be classified as a morality play. It's length was probably excessive, since Hume does not possess the talent of Trollope to entertain well with casual conversation. It is nonetheless worth reading.

Lady Jim is just shy of being completely selfish, self centered, & cruel. Her husband is a little better. Basically, she goes around using & destroying people either for her pleasure or money. You can say that she gets it in the end but I feel she didn't get enough. I found nothing redeeming about her. The reader has a nice calm voice but he trips a lot as if he isn't paying attention to the story. It was distracting for a while until I got used to it. He also has a habit of raising his voice as if asking a question when there is none but I adapted to that quickly.

Reading was clear though somewhat mechanical. Agree that it is not a mystery but a morality story. End was contrived, but good story on the whole.

I didn't like this story as much as other Fergus Hume works. It is pretty depressing.