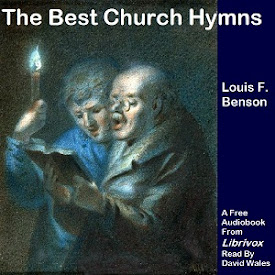 This 1898 book is the result of a survey of 107 hymn-books. The thirty-two hymns are ranked in order of popularity. The texts in this recording are said only, not sung, along with a few explanatory notes for each hymn (some footnotes, not all, here recorded). The texts are preceded by two essays concerning hymns and their standards. Benson (1855-1930) was an American Presbyterian minister who edited several hymnals. - Summary by David Wales (1 hr 37 min)

Introduction 1: What Are The Best Hymns?

Introduction 2: What Is Today The Standard Of The Best Church Hymns?

Could have been better

I hate to give a book of hymns three stars, but this volume didn’t quite rise to the occasion. The compiler states that he intended the book to be a textbook, which might explain the dry nature of the introduction. The brief biographies about the hymn writers were interesting, but not something I was looking for. The compiler had a novel method for deciding which hymns should be included in his book. He collected about 100 hymnals, picked through each one and calculated which hymns were the most common. He considered therefore that these were the best hymns and hence deserving of inclusion in his book. Personally I think this is not an indication of which hymns were best, rather which were most popular. But I guess in his reasoning, to be popular meant it must be the best. Whereas I have a slightly more jaded opinion on popularity versus quality. The narrator was good, though I wished at times he read a little slower so I could more fully absorb the words.