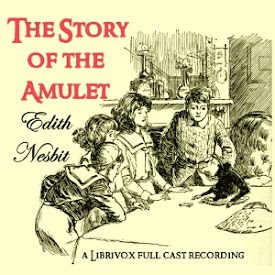 The Story of the Amulet (version 3 dramatic reading)

The Five Children (from Five Children and It) are once again on holidays, but this time with no sand fairy to grant wishes - or is there? In a pet shop they meet with their friend the Psammead again, and a whirlwind adventure follows through time and space! The magical Amulet has been broken in half, and they must find and reunite the lost half with their own. But they are not the only ones seeking the power of the Amulet...

The third book of the "Psammead" Trilogy follows directly on from the event of "Five Children and It" and "The Phoenix and the Carpet". - Summary by Beth Thomas
Narrator: Peter Yearsley
Cyril: Ashur Gharavi
Anthea: Beth Thomas
Robert: Devorah Allen
Jane: Rachel
The Psammead: Rob Board
Jimmy "The Learned Gentleman": Tomas Peter

Chapter 2: The Half Amulet

Chapter 5: The Fight in the Village

Chapter 6: The Way to Babylon

Chapter 7: The Deepest Dungeon Below the Castle Moat

Chapter 8: The Queen in London

Chapter 12: The Sorry-Present and the Expelled Little Boy

Chapter 13: The Shipwreck on the Tin Islands

This is on the whole a well-read book; Cyril was the only character whose voicing disappointed me, and he wasn’t awful. The important thing, of course, with this series is to have a good Anthea, and I was quite satisfied with her. The book was only fair. In her later books E. Nesbit seems to lose some of her particular charm, valuing pretty things, or fanciful ones, or even moralistic bits over the child dialogue she does so well. It isn’t so bad here (certainly far better than ‘The Magic City’ or ‘Wet Magic’), perhaps because she has to keep up the characterization from the previous two books, but things are starting to lean in that direction. It is undoubtedly at its worst when the children visit a future socialist utopia and are edified by littering laws, E. Nesbit‘s own ideas about education, and the apparent canonization of H.G. Wells (as a social thinker, not an entertaining writer). On the whole, worth hearing, but with some tedious points.