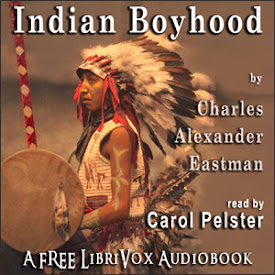 Indian Boyhood is a lively and appealing first-person recounting of the life of a Sioux child in the last days of the tribe's "wild" life in the 19th century, before they succumbed to fences, boundaries, and other constrictions of civilization. Charles Eastman, born in 1858 in Minnesota, spent his childhood first in the forests of the land of lakes and later in the wide-open prairies of the Dakota territory. He describes his comprehensive training in woodcraft, horsemanship, and hunting, and retells many stories from his elders that were so important in conveying his tribe's oral traditions. Eastman does not minimize the ever-present danger that children experienced in such an upbringing, but he also does not lose his sense of the fun and excitement of it all. Listeners will probably wish they could similarly jump on their pony and gallop across the wild and free prairie like the young Ohiyesa. (5 hr 47 min)

An expansion of the book ' Indian childhood' by the same author provides further insight into Native American culture in the later part of the nineteenth century . The reader was most excellent thank you.