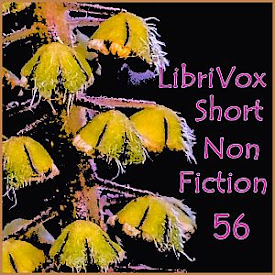 Fifteen short nonfiction works in the public domain, independently chosen by the readers. Topics include the impact of World War I on human society and endeavor: In 1916, Woodrow Wilson declares that "real glory" comes from wartime "self-sacrifice," and Wilson's call is taken up by an American officer on the front ranks who writes that he could "not have wished a better way to die than for a righteous cause and one's country." Meanwhile, German industrialists experiment with textile fibers made from wood pulp and nettles, as cotton supplies are cut off, and an American sculptress, Anna Chapman Ladd works with the Red Cross to create portrait masks for soldiers, whose faces have been maimed in battle. Other topics include science: teaching children about static electricity by rubbing a cat's fur, a 1945 tsunami that destroyed the Scotch Cap lighthouse in Alaska and killed the five coast guardsmen stationed there, and photographer Wilson Bentley explaining how he captures images of snowflakes on film. Eastern and Western philosophy are represented with excerpts from Lau Tzu, Soren Kierkegaard, and Thomas Browne. Finally, there is a humorous essay from Robert Benchley: "Coffee, Meggs, and Ilk." -summary by Sue Anderson

Experiments with Nettles as a Substitute for Cotton in WWI

Letter by An American Officer, 1918

New Faces for Old: Anna Coleman Ladd and the Studio for Portrait Masks

A Non-denominational Prayer for Armistice Day

Static Electricity: The Experiment with the Cat

Tao in its Transcendental Aspect and in its Physical Manifestation