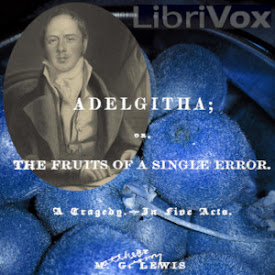 Adelgitha; or, The Fruits of a Single Error

The second original tragedy written by Gothic writer Matthew Lewis, Adelgitha; or, The Fruits of a Single Error is a markedly more serious affair than his melodramatic output, dealing as it does with a fallen woman who is mercilessly blackmailed by a ruthless tyrant when she spurns his advances. Set in Otranto during the High Middle Ages, and featuring fictionalized depictions of historical rulers Robert Guiscard (of the Normans) and Michael Ducas (of Byzantium), Adelgitha is an archetypal Gothic drama that, while not especially refined or meritorious in terms of quality, still manages to thrill in that deliciously overwrought way that Lewis knew how to sell. Sit down with it during a stormy night, turn off the lights, and prepare yourself for a few hours of treachery, murder, madness and despair! - Summary by Tomas Peter