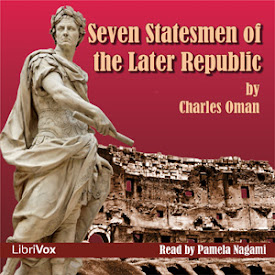 Seven Statesmen of the Later Republic

While there are many general histories of the decline and fall of the Roman Republic, the Oxford historian, Charles Oman, writes that his little book is rather "a series of studies of the leading men of the century, intended to show the importance of the personal element in those miserable days of storm and stress." We hear of the tragic struggle of the brothers Gracchi to make farm ownership possible again for ordinary Romans, of Marius's reform of the army, and of the ruthless proscriptions of Sulla. Next comes the real estate tycoon, Crassus, who buys his way into politics only to lose his head in Syria, Cato clinging desperately to lost republican ideals, and Pompey a military prodigy greedy for fame. The volume ends with Julius Caesar, who Oman writes "did much to shape the future destinies of the world" so that even in "the darkest times of the Middle Ages his story was not forgotten." - Summary by Pamela Nagami (11 hr 55 min)

Ch. 1: The Later Days of the Roman Republic

In the final 3 minutes of this work, Oman admits that we can never know Caesar's plan: crown or constitution. Yet he spends much of the work blatantly judging him for seeking the crown. Such inconsistency is unworthy of a true historian. Worse, his personal dislike of Caesar causes him to attribute most of Caesar's successes to pure luck. His constant use of this word, coupled with his "if's" show that he has a personal vendetta, and a work of history is not a proper place for such. It is important to understand this since any study of this period ultimately revolves around one's interpretation of Caesar. A historian of different opinion of Caesar may paint an entirely different picture of his predecessors, especially Sulla and Cato, but even Marius before his insanity.

This Biography shines a light on women in politics that taught me great deal about a subject that I thought I already knew. The reading is solid and easy to follow, and I recommend it to any who appreciate the parallels between the Roman and American republics.