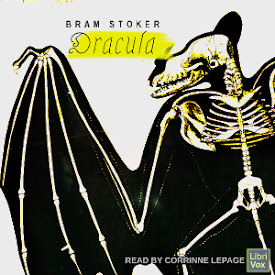 Dracula is an 1897 Gothic horror novel by Irish author Bram Stoker. It introduced Count Dracula, and established many conventions of subsequent vampire fantasy. The novel tells the story of Dracula's attempt to move from Transylvania to England so that he may find new blood and spread the undead curse, and of the battle between Dracula and a small group of men and a woman led by Professor Abraham Van Helsing. - Summary by Wikipedia (15 hr 33 min)

Chapter VII - Cutting from The Dailygraph

The respect and love shared amongst team members was refreshing and touching. All the accents and dialects were courageously taken on by Corinne Lepage and she did them justice. I plan to listen to more of her recordings as this one was extremely well done.

best of the versions

the reading style was smooth and each character had a different voice. great

Years ago I did a paper on this novel. So I know the story pretty well. But I would not be able to read it to anyone in such a beautiful way! The calm and steady voice gives one room for "Kopfkino", as we say in German! You are invited to imagine, to "see the different characters as you want them to be. Corrinne LePage did a really great job!!! Thanks for that!

Never actually read the original book before but now see how it has endured not only as a dusty “classic” of literature but a thrilling, suspenseful novel too. I can imagine Victorians being scared silly too. Some of the views are a bit outdated but quite quaintly so, nothing offensive. Onto the reading, which was easily the best of those I tried to listen to. I get the feeling she is not a native English speaker or at least not British, as I have the feeling she was reading some of the words and phrases phonetically, without understanding their meaning. Thus they came across rather oddly pronounced. Some of the accents made me chuckle but kudos to her for doing them and doing such a brilliantly dramatic and entertaining job.

It is surprising how creepy and at times violent this book is. Nothing is spared. No one is safe. Stoker mocks the thought of the frailty of women by making them seems so subservient and dutiful then proves how important they are with them being there with answers, plans, bravery, and fortitude until the end. I listened to this as part of a book club and it was wonderful. It was so much fun to be able to discuss what was happening and to get different viewpoints.

Bram Stoker's Dracula is hors concours. Simply brilliant. and the narrator captures its essence and portrays all characters brilliantly, especially Lucy Westenra. That being said, the Russian captain is terrible! What is he supposed to be? Almost unintelligible. It didn't ruin the experience for me but it bothered me A LOT. Also Van Helsing's accent in his letters... is he French? Ukranian? what? Alas, overall a great narration for such a great book.

This is one of my most often read books, and I enjoyed having it read to me. The accents were not entirely terrible, and there were only three or four really noticeable mistakes (mostly repeated sentences) or horribly mispronounced words. The reading was fluent, and the accents were consistent, if not always realistic. (Most notably the Scots sailor and, hilariously, the American, Quincy.) Thank you very much.

Le Page has done a wonderful job bringing Stokers enigmatic story and characters to life. I will say that Quincey Morris was rather cringey to listen to, but he is a very minor supporting character and doesn't say much throughout. Dracula isn't just a story of man vs. monster - it is also one of the spiritual warfare between good and evil.