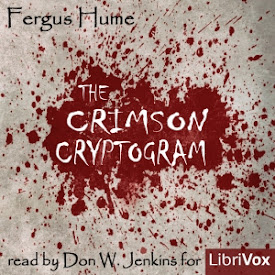 Young Dr Ellis, a struggling new physician, is enjoying a quiet evening smoking and enjoying conversation with his journalist friend Cass, when their mysterious neighbour, Mrs Moxton, bursts in upon them with startling news - her husband has been murdered! Rushing to the scene, the two men discover Mr Moxton, stabbed in the back. They investigate the body thoroughly, but find no real clues to his assailant except for a mysterious series of markings, scrawled in blood on the dead man's sleeve. - Summary by Don W. Jenkins (6 hr 7 min)

The Writing in Blood

The Reading of the Blood Signs

What the Cabman Knew

The Beginning of the End

The End of the Story

I really appreciate the reader using different voices for each character in the book. The story did drag on a little but I think the star of the show was meowing cat in the background on some chapters. I found that hilarious! The cat should audition for the X Factor

Not 'too many readers' for an excellent solo effort. Don W Jenkins does it again, as a first-rate narrator for this end-of-Victorian-period British mystery. Hume's tale rolls right along briskly, keeping the listener interested. Cute addendum: Thought I heard a siamsee kitty very faintly meowing from time to time in background: as 'talkers' themselves, such cats like.to interrupt all discussions and assert their presence. Non-distracting addition to the narration, it makes a listener feel they are sitting right in Don's own front room, enjoying his story-telling.

I looked everywhere for a cat I thought had sneaked into my home and ,finding none, realized it was in the audio. Also wondered what was the background noise that sounded like TV on the recording. Other than those two interruptions, book was okay, although not gripping.

Cat meowing made me think one had snuck into my home but not ding one anywhere, realized it was on the audio. Then, a background noise sounding like a TV was also on the audio. Story was okay, although slow to develop.

THIS WAS THE CAT'S MEOW

A fair story with plenty of false starts and just as many characters of dubious virtue. Don Jenkins is always dependable, and handled the voices with his customary aplomb.

not super exciting but it will do. recently written. well narrated.

Another great reading from Don W. Jenkins ! Thank you

he's reading the voice over to an old-fashioned newsreel.