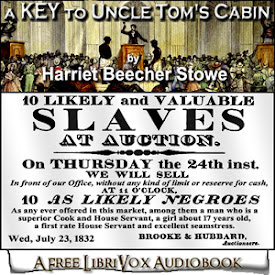 A Key To Uncle Tom's Cabin

After the publication of Uncle Tom’s Cabin, which many claim sparked off the Civil War that put an end to legalized slavery in America, there was a great outcry that Stowe had blown her fictional story out of all proportion to the facts. She was viewed by some as an irresponsible monster. Stowe defended herself by painstakingly publishing this Key, describing the actual people, incidents, statutes, court cases, news articles, advertisements, and published facts from whence she drew her material. She didn’t make anything up! Additionally, throughout this key, Stowe vents her own very strong opinions on the shameful practice of slavery, and examines, especially in Part IV, the failure of organized Christendom in both America and Europe to put a stop to the barbarity. "We must repudiate, with determined severity, the blasphemous doctrine of property in human beings." She and her famous brother, Rev. Henry Ward Beecher, were very active in the Underground Railroad, raising money and endangering themselves to save countless lives. - Summary by Michele Fry (26 hr 57 min)

17. 2.3 – Souther v. The Commonwealth, the ne plus ultra of Legal Humanity

36. 3.5 – Select Incidents of Lawful Trade; or, Facts stranger than Fiction

50. 4.4 – Servitude in the Primitive Church compared with American Slavery

A Key To Uncle Tom's Cabin