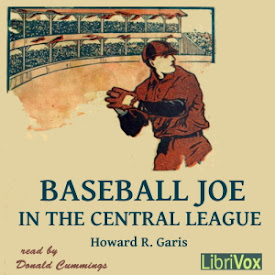 Baseball Joe in the Central League

"Baseball Joe" Matson's great ambition is to become a professional baseball pitcher. The Baseball Joe series follows his career as he seeks to attain his goal. In this fourth volume, Joe accepts a contract to play baseball professionally, and leaves Yale to play on the Pittston team for the Central League, a "bush league" in the professional baseball hierarchy. Joe's career is helped by "Pop" Dutton, a famous pitcher now down on his luck, and hindered by a rival pitcher on the team, while at home, Joe's father is blinded by a chemical accident, and requires an expensive operation, which, if successful, will regain his sight.

Lester Chadwick is one of dozens of house pseudonyms created by the Stratemeyer Syndicate in the early to mid 1900's, to "author" children's series. Contract writers (whose identities were to remain unknown under tight secrecy) were hired to write the books in the series under the various names, usually multiple writers contributing volumes to a particular series. Howard R. Garis (1873-1962) is thought to have ghost-written most, if not all, of the 14-volume Baseball Joe series. - Summary by Donald Cummings (5 hr 10 min)

Off for the South

really a fun book on a good read