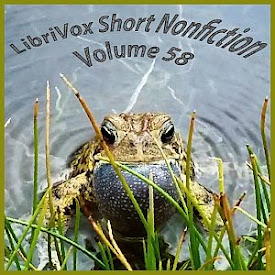 Sixteen short nonfiction works in the public domain, independently chosen by the readers. The human condition is variously explored in Chesterton's essay "The Contented Man," Shōtoku Taishi's "Laws" outlining the proper relationships between rulers and governed in 7th century Japan, the Egyptian "Story of Sinuhe" composed circa 1800 B.C. with its theme of divine providence and mercy, "The Four Minute Men of Chicago" invoking patriotism during World War I, and in Arthur Moss' secularist essay "Natural Man." Contributing to this exploration are selections from Locke's "Essay Concerning Humane Understanding," an exchange between Johann Fichte and Immanuel Kant on the subject of censorship, and an excerpt from medieval theologian Peter Lombard's "Books of Sentences."

The Natural World is the subject of several readings: Anna Brassey's thrilling account of her ascent of the Hawaiian volcano Kilauea, Leopold Claremont's essay on mining jewel stones in Ceylon, an entomologist's praise of toads, and a history of the cochineal trade in Mexico and the Canary islands. "Harriet Hosmer" profiles the career of an eminent 19th century woman sculptor.

Foibles and fables round out the collection. In "A Tight Squeeze for Uncle George," a small boy is smitten with the theater after an outing with his uncle but gets in trouble at home when he tries to duplicate the bright lights and magic of the stage in his basement. Lastly, a charlatan in Alaska hawks doctored photographs of Muir's glacier with a "Silent City" rising out of the ice. (summary by Sue Anderson)

The Story of Sinuhe was translated by Sir Alan H. Gardiner "Johann Fichte and Immanuel Kant on Censorship" is a set of two letters, the first written by Fichte, and the reply by Kant. The letters were translated by William Smith (1816-1896). (5 hr 3 min)

An Ascent of Kilauea

Ceylon: The Island of Jewels

The Four Minute Men of Chicago

The Laws of Shōtoku Taishi

Peter Lombard and the Sacramental System

The Silent City of the Muir Glacier

The Story of Sinuhe

A Tight Squeeze for Uncle George