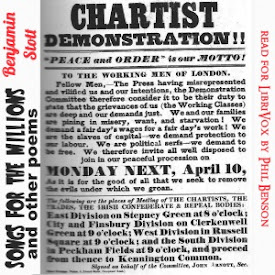 Songs for the Millions, and other poems

Born in Manchester, and a bookbinder by trade, Benjamin Stott was an active trade unionist and member of the Chartist movement. Songs of the Millions, a suite of seventeen short poems in which Stott experimented with a variety of forms, was his best known work. Poverty and famine, injustice and the brutality of the police and their spies, solidarity and resistance are his themes. A devout militant Christian, Stott saved some of his most powerful words for the clergy who urged the working masses to wait patiently in poverty for their reward in the next world. The miscellaneous poems that complete this collection, include Stott's long ode to the Independent Order of Oddfellows Manchester Unity, which remains the largest fraternal organization of its kind in the United Kingdom. (Phil Benson) (1 hr 50 min)

Songs of the millions