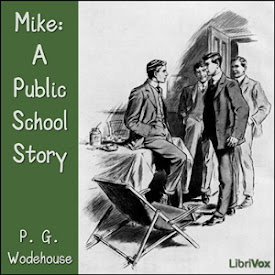 This novel introduces the characters Mike Jackson and Psmith, who are featured in several of Wodehouse’s later works. It shows how the two characters first met each other as teenagers at boarding school. As Psmith doesn’t appear until about halfway through this book, it was later released as two separate books, Mike at Wrykyn and Mike and Psmith. There’s lots of cricket, but you don’t need to understand the game to enjoy the antics of these public school boys as they "rag" each other and the authorities.

I agree not the usual Wodehouse wit. I'm from USA and seeing the reviews, I spent about 30 minutes on YouTube watching several videos about Cricket rules. This helped. I listen to many books and have come to enjoy the British readers, while others often make me cringe. I appreciate the time taken to read, and yet, her dialect which I guess as upstate New York, is one of my least favorites. Also the recording quality and voice tone we're piercing. I used a 5-band EQ and totally cut the mid frequencies, and it still hurt. The story did pick up at chapter 12 as a familiar character arrived.

Have listened over and over!

I have to agree with Wodehouse that this is his best work! Funny and lighthearted, this is the world’s first introduction to the eccentricities of Psmith. A character well worth knowing, and quoting. I found the accounts of cricket games in this book to be humorous and engaging despite my extremely limited knowledge of the sport. Most Wodehouse books jokingly point to money and marriage as the only means to happiness it is a relief to have this one step outside of that trope. The reader did an excellent job speaking clearly and catching the attitude of the moment.

An odd offering from Wodehouse

A strangely unfunny Wodehouse, about boys at public school playing tricks on each other and their teachers. There’s an awful lot of cricket, taken far more seriously than necessary. It's all right as a public school story, although the plot's a bit flat and obvious, but from the author, as a reader I bought certain expectations of humorousness that were not met. The read is clear and well done, but the plot lets it down. Hard to recommend – Wodehouse completists?

Really makes me want to take up cricket

I enjoyed this story a lot. Mike starts out at one school, but is a bit of a lazy bones. So, his pop moves him to another school where the real adventures begin, thanks to the appearance of Psmith. I really enjoyed this story. Reader and recordings were good, I did have to use GE filtering a bit, but nothing huge or detracting to the story.

I've been trying to read as many Wodehouse books as I can because I enjoy his wit. Unfortunately, if there was much in this book I must have missed it as I was pretty bored most of the time. I don't think it matters that I don't know about cricket. There was just way too much of it in this story.

A delightful tale of life in an English public school. The cricket matches get a bit confusing for those of us unfamiliar with the tradition, but the characters and story rise above it. It's wonderful to hear Wodehouse's penchant for simile and metaphor develop and to meet the future Psmith.

I love this reading. She does an absolutely incredible job with Wodehouse. Reading about cricket isn't easy (in those sections of the story where it occurs) and she does a super job.