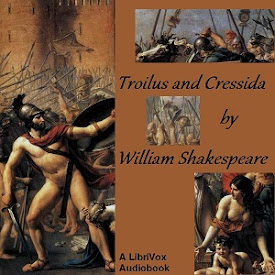 The History of Troilus and Cressida (version 2)

The History of Troilus and Cressida has long baffled critics and audiences alike for its inconsistent tone, which ranges from bawdy comedy to somber tragedy, as well as its decidedly unheroic and unsympathetic cast of characters. It is also a work with a multivalent focus, jumping between different subplots and locations so that even the titular characters become lost in the shuffle of warcraft, manipulation, betrayal, and thwarted machismo. Not only do we follow the young Trojan warrior Troilus on his quest to woo the noncommittal Cressida, but also the Greek leader Agamemnon and his plot to sway the proud Achilles into battle, as well as the scurrilous fool Thersites, who rails against the hypocrisy of everyone involved in a war born (and continued) out of vanity and a bunch of overactive libidos. It is a play that caustically skewers the romance and valour of the Trojan War, as told by the likes of Homer, Chaucer, and Lydgate, while experimenting with the dramatic form in such a way that modern resonances can be found even today.

And to perform it all? Three men (Craig Franklin, Tomas Peter, and Brad "Hamlet" Filippone) and one woman (Sonia), determined to give you a performance of this peculiar "problem play" that you will never forget. You thought you knew your Shakespeare? Well, think again! - Summary by Tomas Peter