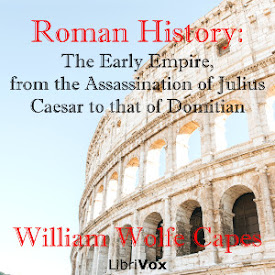 Roman History: The Early Empire, from the Assassination of Julius Caesar to tha…

William Wolfe Capes (1834-1914) was an Anglican cleric, a classicist, and a historian. This is his short chronicle of the early Roman Empire, from the aftermath of the murder of Julius Caesar in 44 B.C.E. to the assassination of the tyrannical Domitian in 96 C.E.. Capes writes about the intervening emperors, including the notorious Caligula and Nero, and then devotes chapters to Roman citizenship, life in the provinces, trade, religion, the frontiers, and the army. (Pamela Nagami) (7 hr 39 min)

Ch. 12: The Position of the Emperor

Ch. 13: The Rights of Roman Citizenship

Ch. 16: The Growing Depopulation of Italy and Greece

Ch. 17: The Frontiers and the Army

Ch. 18: The Moral Standard of the Age

Ch. 19: The Revival of Religious Sentiment

A good balance between life of the rulers and their immediate cultural setting.

Women loves to destroy our history. Men hate to listen to women