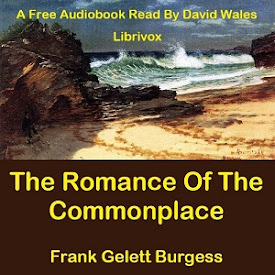 The Romance Of The Commonplace

Thirty four whimsical, tongue-in-cheek, and entertaining essays about not much in particular, published in 1902, by one of the most popular writers of the late nineteenth and early twentieth centuries. The American Gelett Burgess (1866-1951) was an artist, art critic, poet, author, and humorist. Nonsense verse (none in this collection) was a specialty. - Summary by David Wales (4 hr 48 min)

Dining Out; The Uncharted Sea

The Art Of Playing; The Use Of Fools

The Deserted Island; The Sense of Humour

The Game Of Correspondence; The Caste Of The Articulate

The Tyranny Of The Lares; Costume And Custom

The Charms Of Imperfection; 'The Play's The Thing'

The Edge Of The World; The Diary Habit

The Perfect Go-between; Growing Up

Where Is Bohemia? The Bachelor's Advantage

The Confessions Of An Ignoramus; A Music-Box Recital

A Plea For The Precious; Sub Rosa

It certainly could be said to be ‘about nothing in particular’. Many humorous authors of the time adopted an arch, wordy style that, IMHO, doesn’t age well. The style far outweighs the substance. Most of these pieces can be summed up in one sentence. Kids aren’t what they used to be. We like some friends more than others. Being creative is nice. There are some people with whom I’d rather not be stuck on a deserted island. I find them “full of sound and fury, and signifying nothing.”