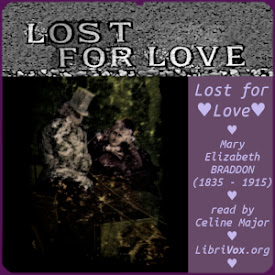 EXCERPT: In all things that he did, Flora's well-being was the doctor's paramount consideration. He brought pleasant people to his house; men of professional standing, and their wives. He sought to win friends for her, and the gentle charm of her manner endeared her to the people he brought about her, almost in spite of herself. To know her was to love her.
To Cuthbert Ollivant's small circle of intimates Flora was known only as his ward. (15 hr 19 min)

It was a nice book for the most part, though Flora (the main heroine) was insufferable by her idleness and ingratitude and morbid self-pity. The only character that I had any liking for was Walter. For the rest I had very slight interest or positive dislike. The book could have been shortened to great advantage. Much of what followed after Walter's accident was tiresome, and the jarring inconsistency in Jared Garner's character was clumsy.. But there were humorous persons and passages, so overall I do not much regret having read it. The melodramatic and shallow title put me off at first, and it wasn't until I saw that it was the author of The Lovels of Arden Court that I thought it might be worth reading. But after this I think I have done with love tales that are nothing else. I like to be inspired to action or with noble sentiment by books I choose to read, but this is really just without enough substance. The narrator was delightful and sympathetic. She did full justice to each character and expression.

While often rather slow-moving, I still enjoyed this old-fashioned story. Daily life was portrayed in the homes of two very different “classes” of families. The complications of a love triangle, and the ramifications of lies and cover ups are far reaching. There was notable character development, and interesting tie-ins between the two families.

one of my favorite narrators (proper title)

Though one of my favorite authors, this story was rather bland, but I could not focus at this time. Will give it another go next year.