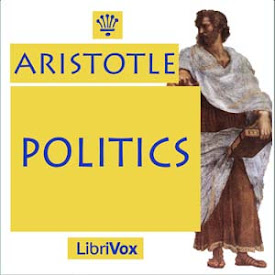 The Politics, by the ancient Greek philosopher Aristotle, is one of the most influential texts in political philosophy. In it, Aristotle explores the role that the political community should play in developing the virtue of its citizens. One of his central ideas is that "Man is a political animal," meaning that people can only become virtuous by active participation in the political community. Aristotle also criticizes his teacher Plato, classifies and evaluates six different types of constitutions and political institutions, and describes his vision of the ideal state. Aristotle's views on women and slavery are unenlightened by today's standards, but his work remains enduring and relevant to this day.
(Summary by Leon Mire) (9 hr 14 min)

Quality is not an act, it is a habit.

the gateway to today's world

it's fascinating to see some of the great philosophies that contributed to the current order politics in education.

Some of the speakers were a bit slow, but this was a decent translation and easy to understand while dozing.

This book has little chance of being assigned in an undergraduate course of any kind, owing to Aristotle's regard for women and slaves. It's basically a critique of Plato's Republic. The audiobook is mostly good, except for book VIII, sections I-IV, which are unlistenable.

Answers to a lot of questions

This book from before christ is more correct than nearly all modern philosophy books and it is to the point. How Greece has fallen from producing men like this to a country that is racked by degeneracy, invaders and abortion. It is no wonder that the average IQ has fallen to 92. I wonder what the average IQ was at the time of Aristotle