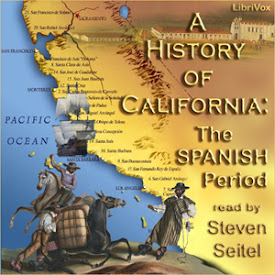 A History of California: The Spanish Period

If you have ever wondered why Spain (and not Japan, which was so so much better positioned to do it) was first to “settle” the Golden State, this book is for you. Professor Chapman has produced a comprehensive and highly entertaining popular history of “the Californias,” beginning with a nod to geography and the native races and carrying on through to the arrival of Old Glory in 1848. What might in less capable hands have proved a heavy historical loaf to digest is lightened and leavened with the yeast of “interesting incident” throughout. Consider the plight of the newly-appointed Governor of Alta California, Pedro Fages, whose own wife, the fiery Catalan Doña Eulalia Callis, who, when she wasn't giving away to the “naked indians” all of her own clothes (and the Governor's, too) secretly petitioned the authorities in Mexico for his removal from office. The author relates at some length the romantic story of beautiful Conceptión Argüello, who chose to wait faithfully all her life for the return of the rascally Razánov the Russian, with whom she had fallen in love. The tragic conclusion of this affair is touchingly imagined in an extended quote from the famous poem by Bret Harte.(1) But not all is frivolity. The historical meat is here as well, in breadth and in detail. The author's stated purpose is “to show that California history is important as well as interesting,—that the great Anza expedition of 1775-1776 and the Yuma massacre of 1781 demand inclusion in any comprehensive history of the United States,—that California, while it indeed has a romantic history to tell, has also a great deal more than that to contribute to the cherished traditions of the American people.” (Preface) (1) Conceptión de Argüello. by Bret Harte, Presidio de San Francisco, 1800. - Summary by Steven Seitel (20 hr 9 min)

The Effect of Geography upon California History

The Chinese along the Pacific Coast in Ancient Times

The Japanese Opportunity in the Pacific in the Early Modern Period

Origin and Application of the Name California

The Northern Mystery and the Discovery of Alta California

Progress of the Idea of Overland Advance to the Californias, 1697-1765

The Spanish Occupation of Alta California

The Pacification of Sonora

The Precarious Footing of the Early Settlements in Alta California

The Russian and English Agressions in the Pacific Northwest

Bucareli's Attention to the Local Problems of the Californias

The Founding of San Francisco

The Commandancy General of the Frontier Provinces

Having lived in California many years I found this book very interesting. I lived on a sailboat and we did extensive sailing in the waters described. I now live in the Pacific NW, so it all ties in. The narrator mr. Seitel did an excellent job. Looking forward to the 2nd book in this series. Thank you Librivox, JK (compulsive reader)