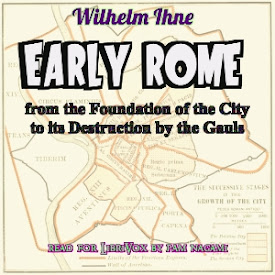 Early Rome, from the Foundation of the City to its Destruction by the Gauls

In this short scholarly work the German historian, Wilhelm Ihne, elucidates what is known or can be deduced about Rome's early history, from the time of its legendary founders and kings, through the establishment of the Republic, to the invasion of the Gauls in 390 B.C. Ihne writes that "No great state known to history can be traced to such a small beginning as Rome." This book shows how the slow evolution of Rome's political institutions, through class conflict and compromise, created a state which, despite few natural advantages, was destined to rule the world. (Pamela Nagami, M.D.) (6 hr 49 min)

Ch. 1: The Causes of the Greatness of Rome

Ch. 5: The Five Phases of the History of Rome in the Regal Period

Ch. 6: Religious Institutions in the Time of the Kings

Ch. 7: Character of the Monarchy

Ch. 8: The Senate of the Regal Period

Ch. 9: The People in the Regal Period

Ch. 10: The Magistrates of the Republic

Ch. 11: The Senate of the Republic

Ch. 12: The Popular Assemblies of the Republic

Ch. 13: The Tribunes of the People

Ch. 15: The League with the Latins and Hernicans

Ch. 16: The Wars with the Volscians and Aequians

Ch. 17: War with the Etruscans

Ch. 20: The Foreign Relations of Rome Down to the Conquest of Veii

Ms Nagami is an excellent reader. The text itself is a little strange though. The author spends a great deal of time debunking the very stories he’s trying to tell, which is odd since most of them are obviously Roman origin myths, comparable with early Greek myths of the same nature. Clearly these myths aren’t meant to be taken as objective history, which makes it a little baffling as to why the author would spend whole chapters carefully debunking the logical inconsistencies of the stories. If you skip those chapters though, there is some good information in here about a period of Roman history about which comparatively little is written.

Pamela Nagami is a hero