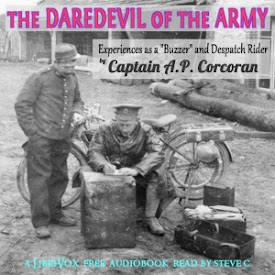 At just twenty-six years of age, the author – A P Corcoran had already led an adventurous life, having twice sailed around the world, experiencing many cultures and civilisations, journeyed and hunted through the heart of Africa, worked on a ranch in Bolivia and travelled throughout Europe. With Austria and Serbia on the brink of war and both Germany and France preparing for imminent hostilities, he managed to escape back to England just in time to hear the first cry for volunteers to join the British Army. When a special call came for University men to form for the first time a corps of motorcycle despatch riders, he signed up with the Royal Engineers Signal Section and undertook countless missions. In the middle of battle, the only way that communications could be passed between different sections was by the bravery, ingenuity, persistence and dedication of the motorcycle despatch riders. Promoted during the war from corporal to the rank of captain he also moved from despatch riding to being Brigade Signal Officer in operational charge of his section’s wireless, telephone and telegraph communications. Never far from the front line, A P Corcoran and his fellow riders and signal comrades performed an invaluable role in ensuring that the vital flow of information was maintained between any and all fighting units in the field of operations. “Deliver your despatch at all costs ...” was the watchword of their Corps. - Summary by Steve C (5 hr 35 min)

Chapter 3 - The Telephone Proves Its Utility and Instability - Part 1

Chapter 3 - The Telephone Proves Its Utility and Instability - Part 2

not what I expected but the reader makes it very real