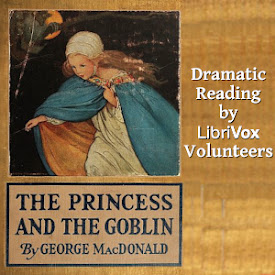 The Princess and the Goblin (Dramatic Reading)

The story of a Princess named Irene, and her adventure with a boy named Curdie Peterson. Princess Irene meets her grandmother, and Irene wants her nurse, Lootie, to know that her grandmother is so sweet and kind. But Lootie doesn't believe there is a grandmother. One day, while it was getting very late outdoors, Lootie and the Princess loose their way, and cannot remember which way was back home. But then Curdie, the merry miner-boy, want's to save the princess from the evil goblins, and so he makes sure that they cannot get to her. The Princess then wants Curdie to meet her grandmother, but somehow, Curdie cannot see Irene's grandmother, and so he becomes angry with Irene. Much later in the story, the goblins devise an evil plan, to try and merry their prince Harelip to the Princess Irene! And now Curdie knows he must save Irene, even though he was angry with her. So after talking with his parents, Curdie goes out to save the Princess Irene from the horrible goblins. But does Curdie save the Princess? And do the goblins marry their prince Harelip to the Princess Irene? This fascinating story will tell it itself in this wonderful dramatic reading! ( Elijah Fisher)

Chapter 1. Why the Princess Has a Story About Her

Chapter 2. The Princess Loses Herself

Chapter 3. The Princess and - We Shall See Who

Chapter 4. What the Nurse Thought of It

Chapter 9. The Hall of the Goblin Palace

Chapter 12. A Short Chapter about Curdie

Chapter 15. Woven and Then Spun

Chapter 22. The Old Lady and Curdie

Chapter 23. Curdie and His Mother

Chapter 27. The Goblins in the King's House

Chapter 30. The King and the Kiss

my daughter & I truly enjoyed this reading together!

It was okay. Long but okay.