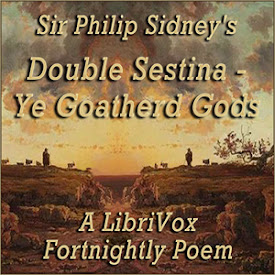 LibriVox volunteers bring you recordings of Double Sestina - Ye Goatherd Gods by Phillip Sidney.
This was the Fortnightly Poetry project for May 5, 2019.
------
Poem is included in the book "Countesse of Pembroke's Arcadia" Ye Goatherd Gods" depicts the sorrows of two shepherds who love the same woman. She has left them both, however, and the two shepherds are dejected and heartbroken. They appeal to the gods, to nature, and to the heavens in their angst, and everything they see is altered because of their sorrows. The poem is hyperbolic and highly emotional, with the two speakers engaged in a traditional pastoral singing match. Alternatively its stanzas are the lamentations of two broken hearted goatherds who pine after the goddess Urania, who was one of the nine Greek Muses, the muse of astronomy and Astrology. A sestina is a fixed verse form consisting of six stanzas of six lines each, normally followed by a three-line envoi. The words that end each line of the first stanza are used as line endings in each of the following stanzas, rotated in a set pattern with all six words appearing in the closing three-line envoi. The six key words in this poem are: mountaines; vallies; forrests; musique; morning; evening. This is a DOUBLE sestina with 12 stanzas instead of 6. ( Summary by William Jones ) (0 hr 23 min)

A Double Sestina - Read By WJ

A Double Sestina - Read By BK

A Double Sestina - Read By BD