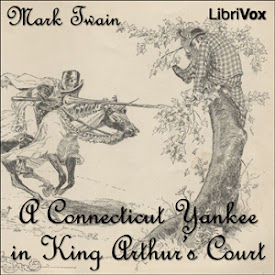 Come and hear the strange tale of The Boss Hank Morgan, a modern day (at the time of publication) Connecticut Yankee who inexplicably finds himself transported to the court of the legendary King Arthur (as the title of the book implies). Hank, or simply, The Boss, as he comes to be most frequently known, quickly uses his modern day knowledge and education to pass himself off as a great magician, to get himself out of all sorts of surprising, (and frequently amusing) situations, as well as to advance the technological and cultural status of the nation in which he finds himself.

In the rather un-subtle sub-text of the story, Twain uses The Boss to express a surprisingly pragmatic and frequently contradictory philosophy. The Boss explores the relative merits of Democracy, and Monarchy, he expresses his views on the “Nature v. Nurture” debate, he frequently speaks forcefully against an established Church, but just as strongly advocates for religion and a variety of churches (just not a compulsory one) and he devotes at least one afternoon to introducing his companions to the concept of inflation. In a far more subtle, yet no less forceful manner, the Boss shares with the reader some views about taxation, slavery (both literal and wage slavery), trade unions, the origins of the German language, the nature of marriage, and probably most powerfully, death.

It is a tall order for a relatively brief text, but Twain manages it all with surprising clarity. No one will agree fully with the Boss on all of these matters, and I would be surprised if Twain himself would. In fact the Boss’s views are so pragmatic, and often contradictory, the reader is left to wonder if Twain himself is alternately speaking through the Boss, and setting him up as a straw man. Either way it is a delightful story and a great piece of American Literature, to say nothing of an excellent argument for education.
(Review written by Steve Andersen) (13 hr 42 min)

At the start I thought it was slow, but found I really enjoy Steve Andersen's reading style. The emotion, thoughtful pause, and fluidity in his reading makes me want more books read by him. Fantastic work! As to the book itself, I had seen it many times before but never read it. It was a very interesting story describing/interacting with the days of Camelot through the eyes of the modern intellectual mind. Today it could be written with even more modern embellishments but I think most people today wouldn't know how to make even the rudimentary gunpowder. If you should decide to listen, enjoy!

Theres hardly any need to review Mark Twains novel - you might want to look at any encyclopedia for a more qualified review. This audio book is certainly worth downloading, usually one has already read the book - some dozen years ago. I really enjoyed the audio book, because for me it was the first time to listen to the original (english) text which is, of course, better than even the best translation could be and the recording is understandable easily for non-native speakers. If you had no occasion to read "A Connecticut Yankee in King Arthur's Court" yet, then don't miss it now! If you only have seen "the movie" (I think there's more than one) be assured that it can't have covered more than an arbitrary part of the book and I seriously doubt, the anarchic spirit of Mark Twain's writing is 100% portable to another medium.

I greatly enjoyed this audio book. I was a bit taken aback by the rabid anti-Catholic and anti-monarchy rhetoric which seem odd and out of place today. That said, I don't deny Mark Twain his right to his opinion and I understand that 1889 was a different time. That aside, the book was very funny and the reader did an absolutely fantastic job.

I have to check this out

This whole AudioBooks Online is new to me, as I just moved away from a house where Dial Up was all that was available, but I've always been a fan of Mark Twain, and my name is Steve Anderson (with an 'o') so I HAD to download this to listen to at a later date... Will rate after listening~

I really enjoyed the story and was yet again amazed at how deftly Twain handles complex socio-economic issues. The reader, for the most part did well- certainly better than I would have. I just had trouble getting over the mispronounciation of certain words like furtively and obeisance.

The going back into time of course doesn't make sense by itself, but is the only way of possibly introducing a story like this. Is excellent thought, shows how much a little thinking can help.

One of the best books I've ever read. Didn't like the readers voice a great deal but definitely worth listening anyways. 5 stars all the way

Very clear and very well read. Steve did a great job of bringing the characters out to the listener, and relaying Twain's wit.