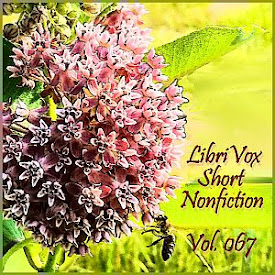 Twenty short nonfiction works chosen by the readers. Two U.S. Presidents are remembered in "A Colored Man's Reminiscences of James Madison" and Washington's "Address to Congress on Resigning His Commission (1783)." Other topics in history and political theory include two of George W. Ball's memos about the Vietnam War from 1965, "Irish Marriage Rites," "Celts and Celtophiles," Kropotkin on "Anarchism in Socialistic Evolution," a tragedy at sea ("The Titanic"), and a look back at "The Passing of the Sailing Ship." Religion and philosophy are represented with two selections from Kierkegaard's "Preparation for a Christian Life" and a sermon by Spurgeon ("Glorious Predestination"). Biographies pay homage to the mathematical genius Srinivasa Ramanujan. How-to and guidance readings include farming advice from George Washington Carver ("Help for Hard Times"), "Teaching Mathematics with Paper Folding," "Sexual Neuroses," and "Elementary Lessons in Cookery." "The Common Milkweed" celebrates one of summer's roadside flowers. Finally Richard de Bury pens a tribute to books in a selection from the Philobiblon, written in 1345. Summary by Sue Anderson

Selections from Kierkegaard were translated by Lee M. Hollander
That the Treasure of Wisdom is Chiefly Contained in Books was translated by E.C. Thomas (4 hr 58 min)

Address to Congress on Resigning His Commission (1783)

Christianity as the Absolute; Contemporaneousness with Christ

Help for the Hard Times

Invitation and the Inviter from Preparation for a Christian Life (1850)

Memorandum From the Under Secretary of State to President Johnson, June 18, 1965

The Passing of the Sailing Ship

The Place of Anarchism in Socialistic Evolution

That the Treasure of Wisdom is Chiefly Contained in Books, a Selection from the…