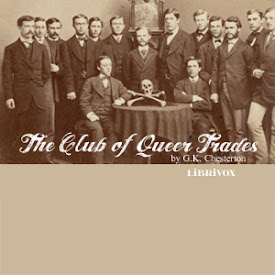 The Club of Queer Trades

A collection of six wonderfully quirky detective stories, featuring the 'mystic' former judge Basil Grant. Each story reveals a practitioner of an entirely new profession, and member of the Club of Queer Trades. (Summary by David Barnes) (4 hr 48 min)

The Tremendous Adventures of Major Brown

The Painful Fall of a Great Reputation

The Awful Reason of the Vicar's Visit

The Singular Speculation of the House-Agent

The Noticeable Conduct of Professor Chadd

The Eccentric Seclusion of the Old Lady

In "The Club of Queer Trades" the detective, Rupert Grant, is a Sherlock Holmes-like private eye who investigates crimes and chases crooks with great self-assuredness in his powers of deduction. But he is always wrong. The hero of these stories is not Rupert, but his older brother, Basil Grant, a retired judge. In each case, Basil proves to Rupert hat there has been no crime and no crooks! The stories are funny and entertaining and they are very well read by David Barnes. Many thanks for this excellent performance.

This is an anti-Sherlock Holmes collection of detective stories. The Honorable Justice Basil Grant is everything that Holms is not, good humored, intuitive, and compassionate and more than a bit nutty. It is quite witty. It is riddled with perceptive criticism and observations about modern life which I found very relevant even today although it was written more than a century ago. I would say it is good not great. The main fault lies in the predictability of the stories which is inevitable given the central conceit of the collection. So to that extent it does not work so well as a mystery. But as parody, humor, wit and social criticism it excels.

The quality of these stories varies widely. I was entertained by the first two, and would recommend them. I'm afraid not all are their equal. When, within a story, the narrator comments (accurately) on the boring nature of another character, and then said character is allowed to go on boring the reader/listener for minutes more, I lose interest and tune out. And when what seems to be a collection of clever mystery/adventure stories turns into a philosophical exercise of repetetitive refrain, I have to wonder exactly why the author - who was perfectly capable of writing a good yarn - chose to do so.

I started listening to this because I love listening to David Barnes, and because I enjoyed the first of the Father Brown series by Chesterton. This book was a bit like listening to someone describing a weird dream that they can't quite wake up from, only to find out everyone else at the sleepover was having the same dream. I enjoyed the ride, but I think it's time to leave the carnival and enjoy a strong, hot cup of coffee.

One counts on genius when the author is Chesterton. I found these stories merely clever. None-the-less you will get flashes of the great man's one-of-a-kind insightful brilliance in matters of human nature. Not classic G.K. Chesterton but worth a listen. The narration is pro quality; superb job by an esteemed reader.

The Club of Queer Trades

I recognise in the cover photograph a distant relative, on my maternal side, who belonged to Yale University's Skull and Bones Secret Society. Be that as it may, one may access the text of "The Club" at http://www.gutenberg.org/files/1696/1696-h/1696-h.htm and the BBC Radio dramatisation at https://archive.org/details/bbcradio4extragkchestertontheclubofqueertrades

not his best work

The plot a bit too outlandish; the solutions a little to pat. Still some colorful use of language and interesting ways of backing into thought that is typical of Chesterton. And the narrator is stellar- quite a natural.

This was an interesting book, a bit odd at times and some stories are better than others. I thought it was like an eccentric Sherlock Holmes, less "deduction and logic" and more "fantastic". The reading was excellent