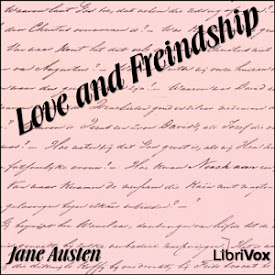 Love and Freindship [sic] is a juvenile story by Jane Austen, dated 1790, when Austen was 14 years old. Love and Freindship (the misspelling is one of many in the story) is clearly a parody of romantic novels Austen read as a child. This is clear even from the subtitle, "Deceived in Freindship and Betrayed in Love," which neatly undercuts the title.

Written in epistolary form, it resembles a fairy tale as much as anything else, featuring wild coincidences and turns of fortune, but Austen is determined to lampoon the conventions of romantic stories, right down to the utter failure of romantic fainting spells, which always turn out dreadfully for the female characters.

In this story one can see the development of Austen's sharp wit and disdain for romantic sensibility, so characteristic of her later novels.

Jane Austen was a genius at age 14, and this proves it. Excellent reading by Cori Samuel.

This is a fun story to listen to, if you like to hear a young woman's version of how she imagines a lady's life might unfold. It has all the flare of Jane Austen mixed with a child's look at an adult world. Anyone with a sense of humor will at least smile at this work.

This one had me laughing throughout the whole story. Not that it was intended to be humorous, but the things that happen are so random. Knowing this was written by a 14 year old helped my perspective. Reader did beautifully!

this was a lovely piece of work that was wonderfully read. kudos to the reader. starting here on my jane austen binge. looking forward to seeing... listening to her grow through her writings.

Cute unbelievable childishly written tale, all the more charming for having clearly been written by a young but later great novelist

The satirical nature of this early work is wonderful. and wonderful read.

hard to believe that a 14 year old wrote this... the beginning of genius...