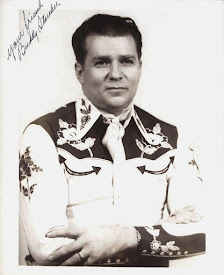 Buddy Starcher was born Oby Edgar Starcher, March 16th 1906 in West Virginia, he died November 2nd 2001. Starcher first learned to play banjo but later became an outstanding guitarist. In 1928, he was probably the first hillbilly artist to appear on radio in the Baltimore area. Between 1930 and 1960, he continually moved around, not only playing venues in his home state, Virginia and Kentucky (especially Charleston and Fairmont), but further afield to Miami, Iowa and Philadelphia. In 1946, he recorded in Chicago for Four Star, including his best-known song, "I'll Still Write Your Name In The Sand". Now a much recorded bluegrass standard, it reached number 8 in the country charts. Later he recorded for other labels including Columbia, Starday, Decca, Bluebonnet and Bear Family Records. In 1960, his television show in Charleston had higher local ratings than NBC's Today. In 1966, he had a number 2 country and number 39 pop hit with "History Repeats Itself" - his cleverly written narration detailing the many similarities between the assassinations of Presidents Lincoln and Kennedy. In the late 60s, he returned to radio and for some years managed radio stations, usually being brought in as a trouble-shooter to pick up ailing stations - once they were running successfully, he moved on to the next challenge. He wrote many fine songs including "Song Of The Water Wheel" (a hit for Slim Whitman). In the late 30s, he married fellow artist Mary Ann (Vasas), who in 1941 took over from Patsy Montana on WLS Chicago.

Not the biggest bluegrass fan in the world, but had to peek in on the newest upload, and this music has great audio & being a little familiar with the W. Va bluegrass people, I am certain there will be quite a few out there who will really appreciate this program. I just gave a few of the programs a quick listen so I was only able to hear some of the music. I wish the year these were broadcast was in the description, I couldn't tell just from listening to the music. Again it was very good quality audio, so it made it difficult to tell just when these were recorded.