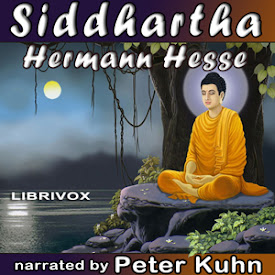 A major preoccupation of Hesse in writing Siddhartha was to cure his "sickness with life" (Lebenskrankheit) by immersing himself in Indian philosophy such as that expounded in the Upanishads and the Bhagavad Gita. The reason the second half of the book took so long to write was that Hesse "had not experienced that transcendental state of unity to which Siddhartha aspires. In an attempt to do so, Hesse lived as a virtual semi-recluse and became totally immersed in the sacred teachings of both Hindu and Buddhist scriptures. His intention was to attain to that 'completeness' which, in the novel, is the Buddha's badge of distinction." The novel is structured on three of the traditional stages of life for Hindu males (student (brahmacharin), householder (grihastha) and recluse/renunciate (vanaprastha)) as well as the Buddha's four noble truths (Part One) and eight-fold path (Part Two) which form twelve chapters, the number in the novel. Ralph Freedman mentions how Hesse commented in a letter "[my] Siddhartha does not, in the end, learn true wisdom from any teacher, but from a river that roars in a funny way and from a kindly old fool who always smiles and is secretly a saint." In a lecture about Siddhartha, Hesse claimed "Buddha's way to salvation has often been criticized and doubted, because it is thought to be wholly grounded in cognition. True, but it's not just intellectual cognition, not just learning and knowing, but spiritual experience that can be earned only through strict discipline in a selfless life". Freedman also points out how Siddhartha described Hesse's interior dialectic: "All of the contrasting poles of his life were sharply etched: the restless departures and the search for stillness at home; the diversity of experience and the harmony of a unifying spirit; the security of religious dogma and the anxiety of freedom." Eberhard Ostermann has shown how Hesse, while mixing the religious genre of the legend with that of the modern novel, seeks to reconcile with the double-edged effects of modernization such as individualization, pluralism or self-disciplining. - Summary by Wikipedia (4 hr 32 min)

The Son of the Brahman

With the Childlike People

the reading style is fine, I'm super sorry to say though that I didn't finish because the ton and intonation of the voice did not appeal to me.

Beautifully read translation of Siddhartha (version 2) thank you to Peter Kuhn. Who is the translator?

thanks for the excellent reading of an excellent book

Great book and a good reader.