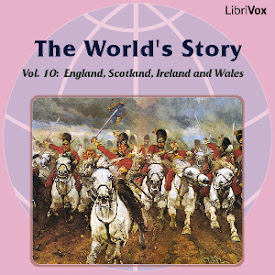 This is the tenth volume of the 15-volume series of The World’s Story: a history of the World in story, song and art, edited by Eva March Tappan. Each book is a compilation of selections from prose literature, poetry and pictures and offers a comprehensive presentation of the world's history, art and culture, from the early times till the beginning of the 20th century. Part X covers the second part of the history of England, from the Stuart Kings till the early 1900s. Also included are excerpts from the history of Ireland, Scotland and Wales, as well as Irish and Welsh legends and Scottish ballads. - Summary by Sonia
Cast list for The murder of King Duncan:
First Witch: Sandra Schmit / Second Witch: Devorah Allen / Third Witch: Monika M.C. / Macbeth: alanmapstone / Banquo: Tomas Peter / Ross: Nemo / Angus: Todd HW / Duncan: Jim Locke / Malcolm: SaraHale / Lady Macbeth: Eva Davis / Messenger: Adrian Stephens / Chief Justice: April6090 / Narrator: Sonia (17 hr 9 min)

Elizabeth signing the death warrant of Mary, Queen of Scots, by Julius Schrader…

A charge with prince Rupert (1643), by Thomas Wentworth Higginson

The trial and execution of king Charles I (1649), by Jacob Abbott

A royalist description of Cromwell's men, by Samuel Butler

England Part III: From the Restoration to the House of Hanover: Historical note

The song of the western men (1688), by Robert Stephen Hawker

James II receiving the news of the landing of the Prince of Orange, by Edward M…

A campaign under Marlborough, by William Makepeace Thackeray

The government in quest of a poet, by William Makepeace Thackeray

The vicar of Bray, by Author unknown

The funeral of George II (1760), by Horace Walpole, Earl of Orford

William Pitt and the Stamp Act (1766), by George Bancroft

The battle of the Baltic (101), by Thomas Campbell

When Victoria became Queen (1837), by Benjamin Disraeli, Earl of Beaconsfield

The charge of the light brigade (1854), by Alfred, Lord Tennyson

Gladstone's fight for home rule (1893), from the Atlantic Monthly

The latest English revolution (1911), from the Outlook

The coronation of George V (1911), by Sydney Brooks

Legends of St. Columba (563 ?), by Adamnan, ninth abbot of the Ionian Monastery

The murder of King Duncan (1040), by William Shakespeare

The invasion of the Norsemen (1263), by Charles Mackay

The capture of William Wallace (1305), by Jane Porter

The coronation of Robert Bruce (1306), by Grace Aguilar

Scotland Part III: To the death of Mary: Historical note

The bier-right (latter part of the fourteenth century), by Sir Walter Scott

John Knox preaching before the lords of the congregation, by Sir David Wilkie, …

The flight of Mary, Queen of Scots, to England (1568), by Sir Walter Scott

Sacking a church in the time of John Knox, by John Prescott Knight, English art…

Why Jenny Geddes threw her stool at the dean, by ''Grace Greenwood'' (Sara J. L…

Gathering song of Donald the Black, by Sir Walter Scott

The execution of Montrose (1650), by William E. Aytoun

A rescue at the battle of Prestonpans (1745), by Sir Walter Scott

Ireland Part I: The golden age of Erin: Historical note

The chase of Slieve Cullinn, an old Irish legend

The ''island of saints and scholars'', (seventh and eighth centuries), by Patri…

The book of Kells (seventh century), by Charles Johnston and Carita Spencer

The house of the Geraldines, by Justin H. McCarthy

The Geraldines, by Thomas Davis

The vengeance of Cromwell (1649), by Oliver Cromwell

The siege of Londonderry (1689), by Thomas Babington Macaulay

The battle of the Boyne (1690), by Thomas Babington Macaulay

The harp that once through Tara's halls, by Thomas Moore

An Irish school (early part of the nineteenth century), by Gerald Griffin

The winning back of the land (1808-1903), by Charles Johnston and Carita Spencer

The dream of Maxen Wledig, from the Mabinogion

Read by Jason in Panama

Beth Gelert; or the grave of the greyhound (about 1220), by William Robert Spen…

The wearing of leek, an old song translated from the Welsh, by Henry Davies

How the Welsh kept the Christmas of 1115, by Sabine Baring-Gould

The march of the men of Harlech (1468), national Cambrian war-song; translated …

How a Welshman became king of England (1485), by Owen Rhoscomyl

The Eisteddfod, by Jeannette Marks