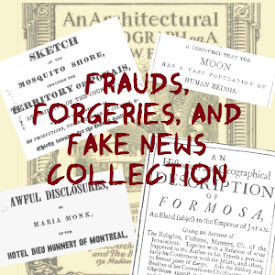 This collection showcases fabricated documents and stories throughout history, and the diversity of purposes and contexts they were deployed in.

The "Awful Disclosures of the Hotel Dieu Nunnery of Montreal" is a fabricated anti-Catholic eye-witness account, published in 1836 and purporting to reveal the horrors of life in a convent.

The Donation of Constantine is a forged imperial decree, supposedly enacting a perpetual transfer of authority over the western part of the Roman Empire from the emperor to the Pope.

George Psalmanazar, who passed himself off as a native of Formosa (Taiwan), wrote a fanciful book about the island, which made a splash in 18th-century London.

The Great Moon Hoax was a series of fantastical descriptions of the moon, published in the 1830s by the New York newspaper The Sun, and falsely attributed to the famous astronomer Sir John Herschel.

Bram Stoker tells the legend of Sebastian of Portugal, the "Hidden King", and the story of Franz Mesmer, the purveyor of "animal magnetism" from whose name the word "mesmerize" is derived.

"An Architectural Monograph on a New England Village" is a painstakingly documented and illustrated description of a village that never existed.

James Macpherson presented the Poems of Ossian as a traditional epic cycle translated from Scottish Gaelic, but modern scholars believe that he largely wrote the poems himself.

E. G. Redmond tells of a hoax involving postage stamps, the first of which was conceived by a stamp collector in Germany.

"Sketch of the Mosquito Shore" was a glowing but false account of the Central American coast, in which one could buy land from the author. (3 hr 39 min)

Excerpt from "Awful Disclosures of the Hotel Dieu Nunnery of Montreal"

The Donation of Constantine

Excerpts from "An historical and geographical description of Formosa"

"The Hidden King" from "Famous Imposters"

An Architectural Monograph on a New England Village

"The Songs of Selma" from "Poems of Ossian"

Excerpts from "Sketch of the Mosquito Shore, including the territory of Poyais"

So boring I could not listen all the way thru on any of the chapters.