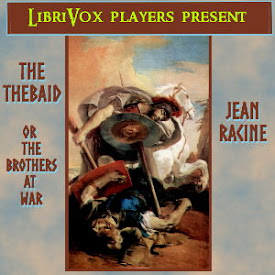 The Thebaid, or The Brothers at War

"The reign of Louis XIV. in France, like the age of Pericles at ancient Athens, was remarkable for literary excellence no less than for military achievements. Like Euripides, Racine confined himself almost exclusively to tragedy.... It was under Molière's friendly auspices that Racine's first published play, "La Thébaïde," was put upon the stage ... at the Palais Royale, Molière's own theater." The story, very much the opposite of a Moliere farce, describes the battle between the brothers Eteocles and Polynices, and being a proper tragedy does not end well for anyone. (NOTE: Act 0 here is a biography of Racine from the introduction of the Translator's book. The play starts with Act 1.) - Summary by Translator and ToddHW