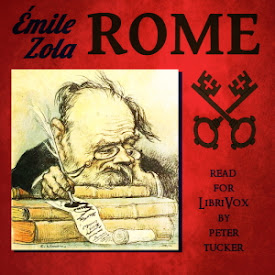 The Abbe Pierre Froment, after his experiences in Lourdes, has written a book expressing a vision of a new enlightened papacy. He visits Rome to defend this book against condemnation and seeks audience with the Pope. He is introduced to aristocratic and ecclesiastical society, and during his three months' stay has the opportunity to reflect on the historical position of the "Eternal City", as well as its future and that of the Roman Catholic Church, reflections imbued with Zola's deep skepticism and his modernistic views. The plot, embellished with great detail, includes a thread of dark intrigue by which Pierre is deeply affected. He returns to Paris with a very much revised vision for the future of humanity. (Peter Tucker) (23 hr 38 min)