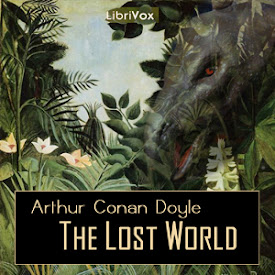 Imagine a strange, tropical place that is almost inaccessible. Time appears to have stood still there. Species of animal and plant life not seen elsewhere on Earth, except in the fossil record, inhabit the place. The lakes heave with the shapes of huge grey bulks moving under the surface. The woods are places where chittering cries move about above your head, as powerful apes move swiftly in the canopy of leaves. Then, a tree splinters nearby, and a dinosaur steps out from his hiding place... and he's eyeing YOU.

Jurassic Park? Not quite. The Lost World was an inspiration for Jurassic Park; in fact, a character in J.P. has the same name as one of the chief characters in The Lost World. It also inspired King Kong. But this is the original! Four adventurers go off to find the place shown in a dead man's sketch book - they find a war between apes and Indians, prowling dinosaurs, a sparkly treasure hidden in the blue clay - they find the Lost World. And because of the treachery of a native guide, their means of escape is destroyed! (8 hr 22 min)

There Are Heroisms All Round Us

Try Your Luck with Professor Challenger

He is a Perfectly Impossible Person

It's Just the very Biggest Thing in the World

The Flail of the Lord

To-morrow we Disappear into the Unknown

The Outlying Pickets of the New World

Who could have Foreseen it

The most Wonderful Things have Happened

For once I was the Hero

It Was Dreadful in the Forest

A Sight Which I Shall Never Forget

Those Were the Real Conquests

Our Eyes Have Seen Great Wonders

Wasn't sure of reader at first, but quickly warmed to him. He does a great job in giving voices and really setting each characters personality with his tone and distinct voices for each. The story was great overall. Professor Challenger is quite a character, but each was truly fascinating in their own unique way. I actually found no flaws in the book and deem it excellent from start to finish. Highly recommended!!

The story was wonderful, a true gem. The reader was so wonderful to listen to. It is interesting to note that if it wasn't for Libravox, I would have never known that Doyle wrote anything but Holmes stories.

Lost World is a Gem

Lost World is a great story with great characters. Professor Challenger is a great creation, if not on par with the great Sherlock Holmes, he is surely close to it. The story explores he adventures of Professor Challenger and the narrator of the story E.D Malone,along with their companions in an Amazonian plateau inhabited by prehistoric creatures and semi intelligent ape men. whatever the equivalent is of a page-turner in audio books is, this is it. The story is well read by Mark Smith who does an excellent job of voice characterisation.

I was happy to join Mark Smith for another excellent "listen" to a Doyle book. There is a bit of a buzz as the recording quality isn't super great but other than that the narration was fine! The story is very like a Jules Verne adventure novel. Overall it's a good book, although for a couple chapters it gets a bit corny and the evolutionary theory influence goes a little wild.

Very nice adventure story and well narrated by by Mark F Smith a narrator I have enjoyed hearing in the past. This is a very good adventure and great story.

Reader & story Great again BUT WHERE ARE THE LAST TWO CHAPTERS??!!!!

very enjoyable easy to listen to

It is easy to see why this novel has stood the test of time as a great literary classic. As a tale of adventure, it is packed with jeopardy, physical danger and a tremendous sense of exploration into the unknown. ACD uses his talents to create depth in his characters and have them follow a thrilling plot line. He also employs great descriptive power to create a minds eye view of every location and situation. As always, Mark Smith is a sublime narrator. Now onto the next Prof. Challenger book, The Poison Belt!