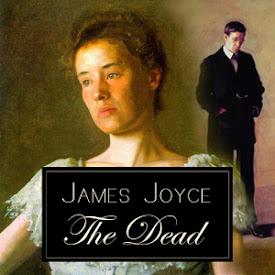 A group of Dubliners gather together for a Christmas celebration in James Joyce's transcendent tale of the mundanity and magic in life and death. "The Dead" is taken from Joyce's collection of short stories Dubliners. (summary by Iremonger) (1 hr 30 min)

Just listened to this, right after listening to Hugh McGuire's version. This is a very good recording, easily on par with that one. The reader is male and Irish and very expressive. He sometimes speaks quite fast but is never difficult to follow, at least not for me (an American unfamiliar with Irish accents). Good sound quality and in one section a rather nice effect where the voices gradually recede as they call goodbye. One mispronunciation I noticed: "impetus" for "impetuous."

An excelent character study that leads the reader smoothly from one emotion to another. Well read by a single reader.

I don't know if this would have been more impactful if I had listened to the entire book The Dubliners of which this is the last novela, but I found it far more impactful than Portrait of an Artist as a Young Man. iIn this story there is more of a resolution even if it is an eternal ponderance. And major props to the reader who was again outstanding, and made the book more entertaining and fulfilling.

Just an outstanding reading - I thought at first the reader was going a bit fast, but soon I adapted to the pace. This is a vast improvement over the botched experiment on "Ulysses", that must have turned Mr. joyce over in his grave. So five glorious stars.

Annoying gay and snobish voice and he talks to fast.