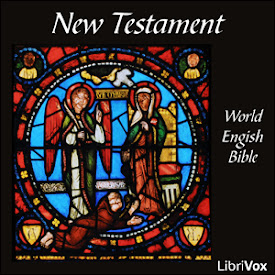 The World English Bible is a translation of the Bible into modern English. Work on the project began in 1997, but the translation has been released directly into the public domain, free of copyright. It is largely an update of the American Standard Version of 1901, and is intended to be both readable and non-denominational. (Summary by Leon Mire) (19 hr 20 min)

Most narrators are good, but Matthew 16 too hard to understand.

need to rerecord the chapters read by the person who did chapter 16. was very frustrating because I could not understand him a lot of the time.

I absolutely love this audiobook version of the Bible! Many of the people reading really get into it, changing their voices when reading what this person and that are saying to each other in dialogue. I listen to this anytime. Going to bed, just wanting something to listen to during the day, doesn't matter. I highly recommend the World English Bible for anyone at any age! 😁😁😁

Accurate translation, and mostly good readers of the Bible. Old and New Teastament come in separate books. I prefer the ESV APP availible on playstore. But both are free and very similar. strong 5 stars!

I hope that reviewers such as Dr. Raycyst are joking (Dr. Raycyst themself probably are), as this is the Truth and the Way.

God Loves you, be His, serve Him.

Hear His Word, Believe Him, Repent of your sins, Confess His Name, Be Baptized, Serve Him.

new testament - the heavy Jamaican accent made it a waste of time.

I have enjoyed many years. GREAT!!!

this book is anti-christian

It contains a lot of heretical material that is contrary to racial justice and equality. It depicts Christ as being a war monger who supported slavery and racial discrimination. Examples include the parable of the cannanite women. Also his admonishion of not bringing peace but the sword make Christ to be the very unchristian. The emerging church needs to rewrite the gospel to make it more Christian. Rather than talking about cursing fig trees, we can have Christ righteously smitting cis gendered white males. Rather than saving the prostitute from being stoned we can have Christ stoning Christians for not using the proper pronouns to accurately describe nonbinary individuals. This book needs to be banned untill it is rewritten to accurately depict Jesus as the character atheists in Reddit believe him to be.