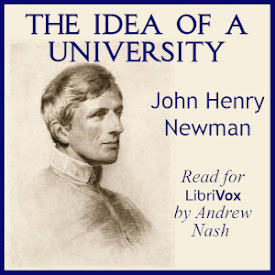 The Idea of a University

John Henry Newman (1801-90) was an Anglican clergyman and Oxford academic whose study of early Christianity led him to convert to the Catholic Church in 1845. At that time Catholics were banned from attending the ancient British universities. The issue was particularly acute in Ireland with its majority Catholic population, so the British government decided to found some non-denominational colleges there which would admit all but which also were not allowed to have Catholic theology faculties in them. The pope of that time, Pius IX, urged the Irish bishops instead to found a Catholic university. Newman, as the leading intellectual Catholic convert, was appointed its founding Rector. He gave a series of public lectures, arguing the case for a Catholic university (such as existed elsewhere in Europe) and also that a university should include theology among its subjects. He also argued for academic education in its own right, against the 'utilitarians' who said that all education should just be practical and immediately 'useful'. Newman later added some other articles on educational topics, such as the relation between science and religion. The resulting book, 'The Idea of a University', became a classic of educational philosophy which is still referenced in debates about the nature and purpose of education today. - Summary by Andrew Nash (16 hr 57 min)

Discourse 2 - Theology a Branch of Knowledge

Discourse 3 - Bearing of Theology on Other Branches of Knowledge

Discourse 4 - Bearing of Other Branches of Knowledge on Theology

Discourse 5 - Knowledge its Own End

Discourse 9 - Duties of the Church Towards Knowledge

Lecture 5 - A Form of Infidelity of the Day

This is really a great recording, thank you so much! The book itself is a true classic and is essential for any Catholic in education.