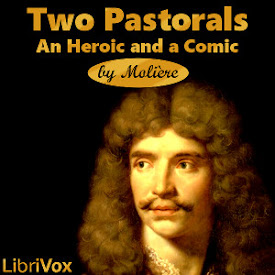 Two Pastorals: an Heroic and a Comic

Moliere, on the way to the Ballet of the Muses, a court festival, started to write a new Heroic Pastoral. "He chose for his subject a similar one to the history of Florizel and Perdita in Shakespeare's Winter's Tale…. The charm of his writing, the exquisite delicacy of the sentiment, and the freshness of the pastoral scenes, cause us to regret that Moliere wrote only the first two acts of this play and never finished it." Though it was performed this way in Dec 1666 - so maybe there is enough here to enjoy.

The Pastoral Comedy which follows it was performed as part of the Ballet of the Muses in Jan 1667 - "most likely replaced the unfinished Melicerte". We only have a script for a number of the scenes; Moliere supposedly destroyed the rest. - Summary by Translator and ToddHW