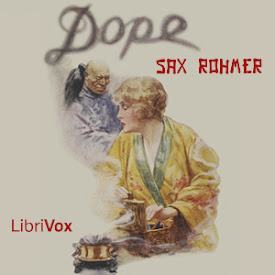 A minor lord is killed and a rich socialite is missing, and they are both tied to the enigmatic Kazmah the Dream Reader, who has also disappeared. New Scotland Yard Chief Inspector Red Kerry scours post-WWI London looking for clues, encountering rich Bohemians, theatre people, landed gentry, sailors, and, stereotypically, sinister Chinese people and sneaky Jews. The story is based on the history of Billie Carleton, a young English actress whose scandalous lifestyle ended with her death from a drug overdose in 1918. (Note that this work contains dated material and attitudes which may be offensive to listeners.) - Summary by TriciaG (9 hr 39 min)

Part First—Kazmah the Dream-Reader Chapter I. A Message for Irvin

Chapter II. The Apartments of Kazmah

Chapter V. The Door Is Opened

Chapter IX. A Packet of Cigarettes

Part Second—Mrs. Sin Chapter XII. The Maid of the Masque

Chapter XIV. In the Shade of the Lonely Palm

Chapter XXVI. The Moods of Mollie

Chapter XXXI. The Story of 719

Chapter XXXII. On the Isle of Dogs

Chapter XXXIV. Above and Below

Chapter XXXV. Beyond the Veil

Chapter XL. Coil of the Pigtail

Chapter XLI. The Finding of Kazmah

Chapter XLIII. The Story of the Crime

Good volunteer readers. Cant say I had much sympathy for the silly heroine. Lucky for her men thought her beautiful and helpless. English deserved the opium blowback in their country after forcing opium on the Chinese who fought two wars to try to stop the British from bringing opium into China and addicting the Chinese.

I read this as a historical mystery.

I agree with others that the basics of the story could be the same today. However, since this book was based on an actual disappearance in 1918, I'd like to think there are major differences. The variety of readers usually irritates me but these readers were all good. The story development kept my interest and I didn't anticipate the ending very early on. An especially good road trip listen.

Not just a problem today!

Very eye opening that drugs are not just a problem today. this could easily have been written about 2020; corruption, predjudice, jealousy, drug cartels, the rich buying their way out, etc. Such a complex story that I'm listening to the whole book a second time! A first for me! I rarely read a book more than once.

Engaging, action packed, and more than plenty of red herrings and plot twists (large and small) to keep things jumping. And those characters...! —>Though sometimes uncomfortable to encounter the negative stereotypes of the past, I feel they were used by this author more to build characters, atmosphere, and convey realism (for the time of writing).

THE BEST OF ROHMER

This is the only novel by ROHMER which did not read like a serial. Certainly I enjoyed Fu Manchu and other works, but the organization of this one made it much more enjoyable. The readers did well.

Really enjoyed the story but it's about three chapters too long