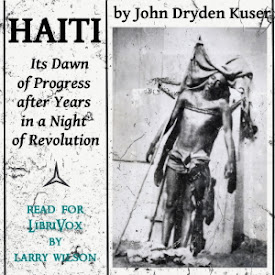 Haiti: Its Dawn of Progress after Years in a Night of Revolution

This book is part history and part travelogue, an account of a brief visit by a wealthy, white U.S. politician during a lamentable time in Haiti’s history of its invasion and occupation by the U.S. military. Dryden offers his views of elements of Haitian culture such as education, religion and commerce, with some optimism but with the shallow understanding of a casual observer who has not been immersed in the culture enough to provide truly insightful understanding. One chapter is an account of his duck hunting expedition. This is, nonetheless, valuable in helping us understand how many understood the Haitian situation in the early twentieth century. Summary by Larry Wilson. (1 hr 30 min)

Every Man's Land A Bit of History

This is a thoughtful account of the history and People of Haiti. The author gives credit where it's due -- even praise! (gasp) -- and blame where it's due as well -- including blame on Colonial powers. Larry Wilson does a good job reading but ought to be ashamed of his written commentary. Such statements do far more harm than good. All in all, a worthwhile book.

If you're interested in Haiti, this may suit you. The narrator has an average voice, not unbearable by any means but he reads too quickly. Also, I can't judge his reading skills properly because, I haven't heard him narrate a good story with several characters. So far, I'm very disappointed in the poor quality of the new readers that Librivox, shouldn't have approved! Allowing awful quality readers, just wastes books because nobody listens after 5 minutes, when a reader is rubbish.

The title says it all.