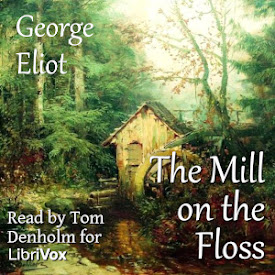 The Mill on the Floss (Version 2)

The Mill on the Floss is George Eliot’s second novel, and was published in 1860, only a year after her first, Adam Bede. It centres on the lives of brother and sister Tom and Maggie Tulliver growing up on the river Floss near the town of St. Oggs (a fictionalised version of Gainsborough, in Lincolnshire, England) in the years following the Napoleonic Wars, with both as young adults eventually meeting a tragic end by the Mill which the family holds so dear. In large measure, their lives are dominated by their father, a successful miller brought down by his inability to resist settling arguments in a court of law. Character differences between Tom and Maggie - he dour and rigid of thought, she lively and impulsive - seem to matter little in childhood, but eventually strain their relationship beyond breaking point. It is Maggie, however, who is the dominant character of the book, arguably one of the great characters of 19th century literature. Each of her relationships is vital to the narrative: with her parents, with Tom above all, but on a romantic level with Philip Wakem, the sensitive hunchbacked son of her father’s (and Tom’s) bitterest enemy, and with charming and urbane Stephen Guest, fiance of Maggie’s cousin Lucy Deane. Maggie’s life is changed utterly by an impulsive elopement which she turns back from, but too late to stop the inevitable abuse and contempt. This is a semi-autobiographical reflection of the vilification which George Eliot (Mary Ann Evans) herself had to endure while openly living with a married man, a time when her brother was willing to communicate with her only through lawyers. Eliot writes of character and relationships with an insight and sharp detail that few authors have ever equaled. It’s a long book, but you will appreciate it for its depth. - Summary by Tom Denholm (25 hr 39 min)

BOOK FIRST. BOY AND GIRL. Chapter I. Outside Dorlcote Mill

Chapter VI. The Aunts and Uncles Are Coming

Chapter VII. Part i Enter the Aunts and Uncles

Chapter XI. Maggie Tries to Run away from Her Shadow

BOOK SECOND. SCHOOL-TIME. Chapter I. Part I Tom’s ''First Half''

BOOK THIRD. THE DOWNFALL. Chapter I. What Had Happened at Home

Chapter V. Tom Applies His Knife to the Oyster

Chapter VI. Tending to Refute the Popular Prejudice against the Present of a Po…

Chapter VII. How a Hen Takes to Strategem

Chapter VIII. Daylight on the Wreck

Chapter IX. An Item Added to the Family Register

BOOK FOURTH. THE VALLEY OF HUMILIATION. Chapter I. A Variation of Protestantism…

Chapter II. The Torn Nest is Pierced by the Thorns

Chapter III. Part i A Voice from the Past

Chapter III. Part ii A Voice from the Past, cont'd

BOOK FIFTH. WHEAT AND TARES. Chapter I. In the Red Deeps

Chapter VII. A Day of Reckoning

BOOK SIXTH. THE GREAT TEMPTATION. Chapter I. A Duet in Paradise

Chapter V. Showing That Tom Had Opened the Oyster

Chapter XI. In the Lane

Chapter XIII. Borne Along by the Tide

BOOK SEVENTH. THE FINAL RESCUE. Chapter I. The Return to the Mill

Chapter III. Showing That Old Acquaintances Are Capable of Surprising Us