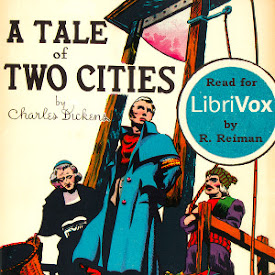 A Tale of Two Cities (Version 5)

Charles Dickens’s A Tale of Two Cities is a novel that views the eighteenth century French Revolution through the lens of nineteenth century Victorian Romanticism. Dickens tells the story of a wide range of characters in London and Paris whose lives intersect in the turbulence of the revolution. Unusual among his novels, A Tale of Two Cities relies heavily on plot rather than characterization. The moralism so typical of Dickens is much in evidence, however, as the author stages his story in the most violent period of the revolution, the Reign of Terror (1792-1794). It is very much a tale of good versus evil, with Dickens essentially realizing in fiction the historian Thomas Carlyle’s now-discredited interpretation of the French Revolution as a struggle between oppressed poor and monstrous aristocrats. (The French Middle-Class, which began and ended the Revolution in reality, are nowhere to be found in the novel) Dickens situates the tensions of the period in the characters of the story: Charles Darnay, scion of the aristocracy but determined to atone for his family’s sins; Sydney Carton, a dissolute English barrister drawn to a plan of redemptive self-sacrifice to give his life to save Darnay, the husband of the woman Carton loves; Lucy Manette, the pure personification of saintly womanhood and the woman both men love; and a duo of comedic characters of a kind more familiar to Dickens’s readers, the shrill Miss Pross and the hapless “resurrectionist,” Jerry Cruncher.

The novel threads a continuous dualism through the story, a dualism both in plot and characterization. Opposite Lucy’s sacredness as a human symbol of love, Dickens gives us Madame Defarge, a human dynamo hell-bent on murderous revenge against Darnay’s family and all its descendants. The Revolution is portrayed as an understandable reaction to the aristocrats’ cruelty toward the poor, but the latter’s response--the guillotine and the trumbrils that supply its steady “wine”--simply represent the poor repeating the same mistakes as their oppressors. The “two cities.” too, are opposites. Dickens’s London is a place where change is often impossibly stymied by stuffiness, but on which the world can rely for the preservation of law and freedom. Paris is a city of hate and lawless vengeance, high in risk but also pregnant with the possibility of regeneration. It is in Paris that Darnay and Carton, so like each other in appearance, so different in their life paths, experience completely different fates, but fates that allow them equally to realize their common dream for a life well lived.

Dickens, who liked to act in this later stage of his career, very much portrays his scenes as set-pieces heavy on dialogue, almost like a play. This poses a challenge to the reader. The novel’s romanticism and symbolism virtually invites exaggeration in the reading of the dialogue, and provides forgiveness for any failures to render these readings “realistic.” Yet there is a complete seriousness to the messages Dickens is trying to convey that must not be undermined by excessive mannerism. For generations to come, audiences will surely continue to love this novel and its reflection on life, and on what makes life worth living. (summary by rreiman) (15 hr 27 min)

Monseigneur in the Country

The Fellow of Delicacy

The Fellow of No Delicacy

Drawn to the Loadstone Rock

A Knock at the Door

A Hand at Cards

The Substance of the Shadow

The Footsteps Die Out For Ever

The last quarter of the book brings all of the threads together to reveal an incredible history that has woven the characters together over time into a final and full denouement.